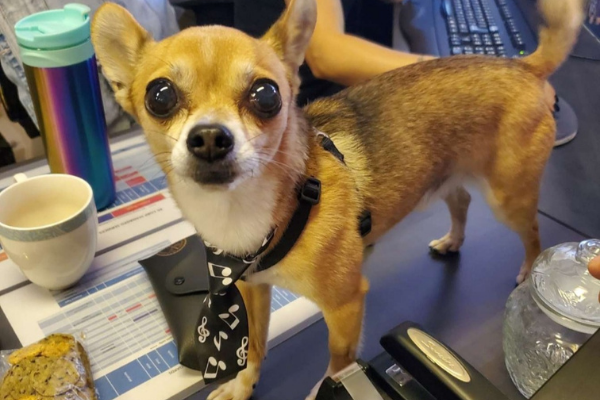 Welcome to the first in the series of ‘PC Corp Pets’! Our pets have been a boon to our individual and team well-being through the pandemic. We will be introducing you to the animal companions who regularly accompany our staff to the office and those who keep our remote team company while they work from home.

Vader loves his business attire. Whether at the office or at home making appearances on video meetings, this lil’ guy is rarely seen without one of his ties on. He loves dapper neckwear so much that he’s amassed quite the collection.  When he’s ready to get down to business, he’ll scratch at the drawer where they are stored to ensure that he gets dressed for success.

Age: Between 10 and 11 years old. His previous owners weren’t sure how old he was.

“I found him on a buy and sell ad through Facebook in 2015 and made arrangements to have a home visit. The gentleman who had him advised that Vader had 3 previous owners and that he couldn’t care for him. After seeing how malnourished he was I made it my goal to show him, that he was worthy of unconditional love.”

“It has been a long process to getting him healthy as he has liver issues, and his teeth and gums were rotten and infected. This past year has been good for him because we were able to get his liver under control and  his teeth removed so he can live a few years more as a healthy boy.”

Things to know about Vader:

Why Data Backup and Replication Should be Mandatory

MFA Fatigue – Attackers Count On You to Tire Out and Give In.