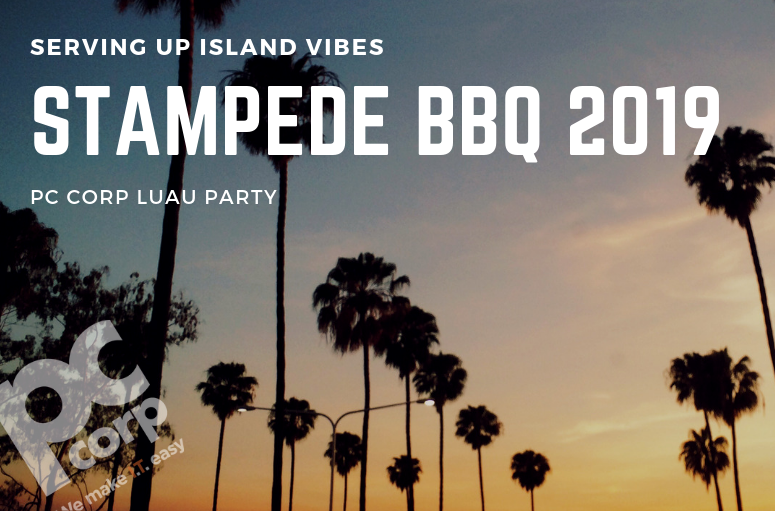 Our Calgary Stampede BBQ 2019 initially took inspiration from the luau – a traditional Hawaiian party that is usually accompanied by entertainment and the sharing of bounty with friends and family.  And what a luau we had, indeed!

But did you know about the paniolo – Hawaiian cowboys? Perhaps one of the most native experiences to the Hawaiian islands is also the most overlooked—the history and existence of the Hawaiian cowboy culture.  In 1793, King Kamehameha was gifted with five Longhorns by British sea captain George Vancouver.  As the beasts were not in good shape after their long sea voyage, he placed a kappa (protection) over the cattle, allowing them to roam and multiply. Little did he know it would lead to a booming beef trade and a high demand for ranchers in Hawaii. Because of this, vaqueros, or Mexican cowboys, arrived on the Big Island and Maui to teach the locals how to corral. Thus began the culture of the Hawaiian cowboy, the paniolo.

From the paniolo, the Hawaiian culture continued to inspire us to ultimately give you a taste of Hawaii the last 200+ years. Who knew that a Stampede BBQ would turn into a history lesson?

For example, lunch was our version of the Hawaiian plate lunch. Dating back to the 1880s, the ubiquitous “plate lunch” is said to have its roots among plantation labourers who hailed from Japan, China, Korea, the Philippines, Portugal and other areas. Its basis: two scoops of rice, a side of macaroni salad, plus a protein.  The PC Corp team served up ‘Hawaiian BBQ chicken (with pineapple of course), fried rice, and a tasty mac salad.

Our team wore the ubiquitous Hawaiian shirts, also known as the Aloha shirt.  The modern Aloha shirt was devised, in the early 1930s, by Chinese merchant Ellery Chun. The shirts were a means to help maintain his business during the Great Depression – a novelty product marketed to tourists visiting the island.  But it wasn’t until after World War II that the Aloha Shirt trend took off.  G.I.’s stationed in Hawaii and the Pan Pacific helped spur their popularity as they brought them back to the continental U.S. as souvenirs, and in the late 40s and 50s increased accessibility to air travel made it easier for tourists to visit Hawaii.

But that’s not all! Thanks to the Aloha shirt, we have us Casual Fridays.  In 1947, the Hawaii Chamber of Commerce debuted Aloha Week, which encouraged Hawaiian men to switch out their suits and ties for aloha shirts. The chamber officially introduced Aloha Fridays twenty years later, the precursor to what we know as casual Fridays.

A taste of the island life is not the same without getting a little bit wet. Did you enjoy the tropical storm that we rustled up for the event? We weren’t sure if Lono, the Hawaiian deity associated with fertility, agriculture and rainfall, received our request in time, but he came through.

Big thanks to Acer, our event sponsor!  The annual PC Corp Stampede BBQ would not be the same without your continuous support.

To our guests: Thank you for joining our Luau and bringing with you food and cash donations for the Calgary Food Bank. Together we raised $1325 and a van full of food, an incredible show of Stampede spirit and generosity!

Mahalo Nui Loa! Thank you very much!  Have a great Stampede and we look forward to hosting y’all again next year.

Mahalo Nui Loa – from all of us at PC Corp!